A Legacy of Words 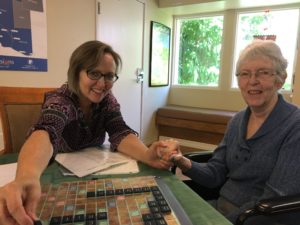 Mama was the undisputed Scrabble Champ of The West Ashley Branch Library in Charleston, South Carolina from 1999-2004.

Growing up, she taught us words like “Oe” (Faroean Wind) and “Jo”(Sweetheart). She collected words the way other moms collected jewelry. One birthday, her sister Nancy gave her a Scrabble Dictionary with her name embossed on the front.  She loved that dictionary! Stuffed in between the pages are notes my Mom wrote to herself of unusual words she discovered like “ratoon” (to sprout from a root planted the previous year) or “azon” (a radio controlled aerial bomb). She would squirrel them away until just the right opportunity to win a game. 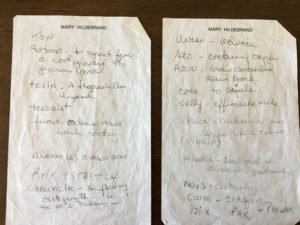 Maybe because she was a logophile, a lover of words, she maintained her ability to speak far longer than others with dementia. She even continued to beat us in Scrabble for many years after her diagnosis.  I was not proud of beating her at Scrabble after we knew she had Alzheimer’s but I was certainly not thrilled when she kept beating me, either! We kept playing with Mama even after she started making up words and needing help with every move until one sad day she just wouldn’t come to the table. She no longer recognized what we were doing.

This week, my sister Liz is in town for a visit. When we went to see Mama, we found her in the facility chapel in the middle of a chair yoga class. The instructor was right in front of her leading all of the residents in some arm stretches. Mama’s hands stayed in her lap and her gaze was at the angels on the chapel wall, not on the activities director. We decided to break her out of her yoga class. Giggling like we used to as kids in church, we wheeled her into the dining hall to play Scrabble. We set up the game and decided that Mama would be on Liz’s team.

What ensued was one of the most fun and competitive Scrabble games I’ve played in years. It’s clear that Mama taught us well because my sister and I are very competitive and evenly matched. Mama didn’t understand what we were doing that day but she was happy to hold Liz’s hand and eat a chocolate while her daughters entered into a war of words. We consulted her dictionary and poured over her long list of acceptable 2 letter words.

I played all 7 of my tiles on the word “shunters” ( a small locomotive) earning a record 70 points on one word only to lose the game to Liz by nine points when she played the word “Li” (Chinese unit of distance) on a triple. At some point while we were playing, Grace, the Hospice aide, came to take Mom for her shower. Liz and I stopped only for a moment to kiss her goodbye and then turned back to the board with an intensity fueled by years of fun-loving but competitive sisterhood. 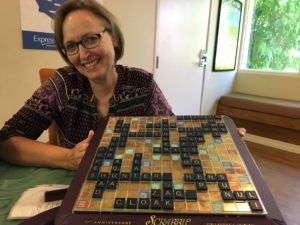 Mom has lost most of her words now, along with their meaning and her ability to string them together into a sentence. But Liz and I will always think of her when we see the word “Qat” (an evergreen shrub) or “Ai” ( a three toed sloth). Mama’s legacy of words lives on in her daughters….