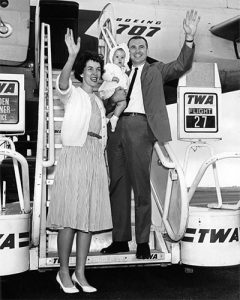 I got my first passport when I was 9 months old. My parents were missionaries in Japan for my first ten years. Growing up in another culture fueled my love of adventure and inspired me to want to learn more about the world.

During a meditation in college, I caught a future vision of myself in front of a group of people with my arms up in the air. I thought it meant that I should become a flight attendant and point out the emergency exits. I flew for American Trans Air, a charter airline, for just under two years. Because I spoke Spanish, I was assigned to many of the South American destinations. While the travel opportunities were fantastic, the job of flight attendant itself was not a perfect fit for me.

What then was my dharma, my purpose in life?

Eventually I realized I was supposed to be a yoga teacher! My arms were definitely still up in the air in front of a group of people, but now I missed the travel.

The following year, I hosted my first international yoga retreat and my dharma was finally fulfilled. I’d discovered the Reese’s Peanut Butter Cup of jobs, a combination of my two loves: yoga and travel. The two were definitely better together. Since then, I’ve hosted 15 international retreats to the Yucatan, the Galapagos in Ecuador, Northern Spain, and Bordeaux, France in addition to 20 Pacific Northwest retreats.

In 2011, Suzy, Karen and I launched our 200 and 300 hr yoga teacher training programs. Two years later we created Work Well NW, a corporate yoga company, which was a perfect avenue for our teacher training graduates to be able to teach in corporate wellness classes.

In January 2020, I sold my third of the 3 companies I helped create to Suzy and Karen, so that I could focus on what I love most: yoga and travel. I’m grateful to them for continuing the programs we started for our extended Three Trees community.

Welcome to Jeni’s Global Yoga Trips!   I invite you to join us for one of our next adventures.

You can read more about Jeni’s philosophy of business in this recent interview with GoSolo: https://gosolo.subkit.com/jenis-global-yoga-trips/ Rocky is Jeni’s husband of more than 3 decades, a natural philosopher and #1 retreat Sherpa. In January 2021, he retired from his job as VP of Retail and Marketing for NW Framing in Seattle, WA. Retirement allowed Rocky and Jeni to realize a three-year dream and move to Gijon on the Bay of Biscay in Northern Spain. Now Rocky spends his days honing his photography skills, creating fabulous meals, learning Spanish and discovering the best of Asturias.

About Clara Pelica, co-teacher for the Puglia Retreat 2023 Those of you who attended our Bordeaux Retreat in 2021 may remember meeting
Clara Pelica. She and I met at the retreat Chateau and instantly felt a bond. I hoped we
might get an opportunity to join forces on a future retreat. I’m excited to share that
Clara will be co-teaching the Puglia, Italy Retreat in 2023!

An intricately woven path between Buddhist, Yogic and Thai Massage studies has led
Clara on an in depth journey of self discovery, awareness and healing over the course
of 20 plus years.

Teaching since 2012, Clara brings a light heartedness approach to her teaching
highlighting breath awareness, mindful movement and restorative practices.
She has trained in Yin Yoga with Sarah Powers and Bernie Clark and is a Level 1
Rest and Renew Restorative yoga teacher by Judith Lasater. Her most recent
meditation training has been the 2 year Mindfulness Meditation Teacher Training
Certification with Jack Kornfield and Tara Brach.

Clara loves to travel and explore different landscapes, cuisines and cultures and
spends as much time as possible in Thailand and India with her teachers. She’s always
happy to talk travel!! A foodie at heart, when not teaching, you can find Clara
working as a private chef with a focus on nutrition and plant based cooking.

Sandi is a Yoga Alliance ERYT-500 teacher who also teaches anatomy for yoga teachers. Sandi has been drawn to the physical, mental, and spiritual benefits of movement since she was a kid. Consequently, she studied sports medicine and then became an Occupational Therapist. In 2014, she simultaneously earned a 200 hr Yoga Teacher Training Certification from Three Trees Yoga and a Thai Yoga Massage Certification. These trainings added an even deeper level of understanding of the healing benefits of movement, and of yoga, in particular. This was still further enhanced through training as a Usui Shiki Ryoho lineage Reiki practitioner.

Sandi enjoys being in nature, hanging out with her family including her pups, and the sense of community that comes from connecting with students. She offers accessible classes that combine her passion for yoga with her knowledge and training in movement sciences, Thai Massage, and Reiki. She develops classes that are alignment focused with a balance of compassion, gentleness, and challenge – and, always with a sprinkling of humor.

About Dana Keegan, co-teacher for the Spain Retreat 2023: Dana Keegan has practiced yoga for over 20 years and has been teaching for the last 10 years. She received her 200 RYT from Konalani Yoga Ashram in Kona, Hawaii and her Y12SR (Yoga and 12 Step Recovery) certification in 2012. She completed the 500 RYT through Three Trees Yoga in Federal Way, WA in 2020. She has been active in the recovery community for 26 years, and her passion is teaching yoga to those who have been affected by addictions of any kind. She is a firm believer that Yoga is for everyBODY, and infuses her teachings with connections to the spirit, mind and breath.

She is a Level I/II Reiki practitioner, a Level I Thai Yoga Massage practitioner, and has hosted annual international Yoga and Recovery Retreats in Costa Rica and Bali, Indonesia since 2016. Check out her website at www.danakeegan3.com to see what else she’s up to.

About Anja Riebensahm, our merchandise designer: Meet Anja, the designer behind our Jeni’s Global Yoga Trips T-shirts and sweatshirts. Anja lived in NYC for 22 years but recently moved to Gijon, Spain where we became friends. She was a creative cake maker, a yoga teacher, and a bartender before becoming an illustrator. These days she draws designs for wallpaper, fabric, murals, portraits, post cards, tea towels and all sorts of other fun projects. Check out her custom design for our merchandise on the shop page! Wear your love of travel when you buy one of our designs!

“At the risk of sounding like a groupie, I love you and Rocky as a couple!” Candy W. (Northern Spain 2017)

“Thank you, Jeni, for organizing this fantastic retreat!” Susan B. (Northern Spain 2017)

“The thoroughness of your planning and execution is totally reliable and much appreciated.”  Elaine W. (Northern Spain 2017)