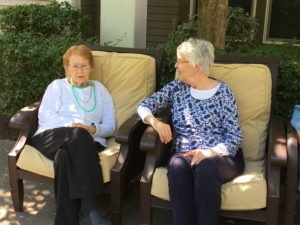 Elaine and Mom in the garden

It was Sunday morning but we had no plans to go to church. I spent my first ten years as the daughter of Christian missionary parents in Japan and have found comfort and community in churches at various times in my life. Recently though, I have felt more disillusionment than inspiration and have stayed away from traditional churches preferring to worship more privately.

Instead, Rocky and I stopped by to visit Mom in her memory care neighborhood. We were greeted by the usual cast of characters who are residents in the facility. Carol, who is the most verbal resident, immediately noted the absence of my dog Tanner, who has been a frequent and popular visitor. I didn’t have the heart to tell her that Tanner had died so I told her I brought my husband Rocky with me instead. She laughed and responded quickly, “I guess I better pet him then!”

We walked Mom out to the garden, saying our hellos along the way. Elaine and John, one of the neighborhood couples followed us outside. Elaine was dressed in two coats and 6 necklaces and had her purse slung over her shoulder. She has red hair and is usually quite feisty. John is married to someone who doesn’t live in the memory care facility, but has innocently become best friends with Elaine. They can often be seen holding hands and sitting together. Today, John was wearing a Hawaiian shirt, shorts, black socks and shoes, looking not unlike a stereotypical Midwestern Tourist in Hawaii.

After a couple of slow strolls around the yard, we all settled into some comfy yellow chairs to warm ourselves in the sun and visit. Chatting with memory care residents can be a little like trying to converse with someone who doesn’t speak your language. I’m always trying to figure out exactly what they mean. John tends to talk as though he is speaking in a secret code. Elaine shared with us how funny she thought John was and how important humor was to her. To which John replied, “What kind of oil?” She nodded thoughtfully and said, “See…I told you he was funny!”

John then jumped up, looking like he was going to wander off but turned back to us and began to sing a hymn. His voice was booming and clear and the words came effortlessly, likely memorized during a lifetime of church services. He commanded all of our attention as he sang, stretching his arms out in a dramatic way as though he was a soloist performing in front of  his congregation. I felt myself get choked up at his artistry, in awe of this man who could not speak clearly but remained a gifted singer. He sang dynamically, adjusting his deep resonant tones to match his words and allowing his vibrato to flow effortlessly.

When he sat down, we all applauded and thanked him for sharing his beautiful voice. Elaine began to talk about the importance of gratitude and appreciation. She explained that her life had been hard at times but that her mother had taught her to feel grateful for sweet moments like this one, with the sun on her face and good friends around her. She spoke so eloquently and with such reverence about the importance of choosing to be grateful even when life was hard. She added, “without gratitude, life is not worth living. Better to be grateful for even the difficult moments for they made you the person that you are right now.” I felt like she had just delivered the sermon today.

Elaine was squinting into the sun so Mom reached over to shade her eyes with her hands. To which Elaine responded,  “you’ll need to keep your hands there the rest of the day!” We laughed. John grabbed Elaine’s hand, looked into her eyes and said, “It’s the alley.” Which I could only guess was secret code for, “Isn’t she lovely?” Then the conversation shifted to where the squirrels were hiding, with John adding that “they must be making squirrel babies somewhere.”

The magic moment had passed. Church was over. It was time for us to go. I left feeling more hopeful and uplifted then when I had arrived in this unlikeliest of churches. Maybe I’ll worship here again sometime. 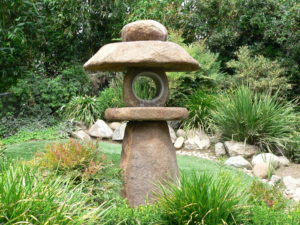