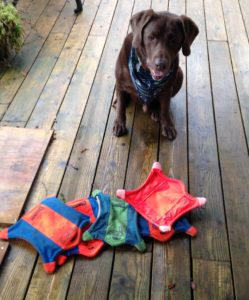 Two and a half years ago we adopted Rudy, an eight year old, 90 lb. chocolate lab. His former owner had raised him since he was a puppy but could no longer care for him. At our first meeting I thought Rocky, a super neat freak,  would say, “No way” when Rudy shook his head and slobber filled the room. Instead, I heard Rocky say, “We’ll take him! I’ve always wanted a chocolate lab.” Rudy came with a Chuck-it Flying Squirrel Disc that his owner said was his favorite. She wasn’t kidding.

We couldn’t say the word “squirrel” without Rudy running to get his toy and turning circles until we threw it for him. After our son Cody did some research on alternative words, we settled on “Ardilla,” the Spanish word for squirrel. Later when Rudy learned Spanish, we had to switch to the very stealth code word “S-Q” to keep Rudy from driving us crazy with his need to chase it.

We live on the side of a steep ravine. When we throw the Squirrel for Rudy, it sometimes gets carried away by the wind, down into the treacherous ravine filled with brush. Rudy stands at the fence looking longingly at his toy until we carefully retrieve it and start throwing it again. This happens so often, Rudy now has a collection of S-Qs so we don’t have to climb down until we run out of all of them. Until recently, he would meet us at the door with his Squirrel every time we came home.

Last month, we discovered during a visit to the vet that the mild hip dysplasia we thought Rudy was dealing with for the past two years, was actually a tumor in his femur. We switched out the joint capsules for pain meds, ordered some Maple Bacon Flavored Canine Cannabis Biscuits and took him home determined to keep him as comfortable as possible for as long as we can.

It got me thinking about the book, Being Mortal: Medicine and What Matters in the End by Atul Gawande, which I read a few months ago. While facing his father’s impending spinal surgery, the author asks his dad, “what trade-offs are you willing to make and not willing to make?” In other words, what defines a life worth living? For some, watching football and eating chocolate ice cream might be enough. For Atul’s father, being with people and interacting with them was what he cared about most. But he added that he couldn’t accept a life of complete physical paralysis, of needing total care.

With Rudy, I have to rely on observation to see what he values; to know when the pain outweighs the pleasure of chasing his Squirrel or going for a walk. Initially, I assumed that when Rudy no longer wanted us to throw the Squirrel, that he would be telling us that he’d had enough. Amazingly though, he’s decided that carrying his Squirrel around in his mouth can be just as sweet, when he’s in too much pain to chase it.

Rudy still occasionally wants to chase his Squirrel a few times and we all appreciate those days more than ever now. I imagine that he is smiling as he catches his slimy toy. I don’t even mind when I have to climb down the hill to retrieve it. We also got him some steps so he can still get up onto our bed and snuggle with us at night and although it breaks my heart to watch him struggle up the steps, he continues to try. In my mind, he has decided that hanging out with us is almost as good as chasing his Squirrel on most days.

I pray that I can hear the message when Rudy decides the trade-off is too great and that I am brave enough to take the steps needed to keep him from suffering. It is the ultimate gift of love for our pets that we can hold them while the vet helps them go to their final sleep. I know Rudy will dream of chasing his Squirrel and we will forever refer to squirrels as S-Qs in honor of our sweet boy.