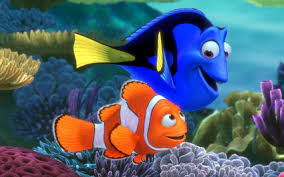 I’m currently living a real-life version of the movie, Finding Dory, the sweet story about a fish with memory issues who sets out to find her long-lost parents. Only this fishy saga is about my Mom and her search for her dear friend, DJ (Dorothy Jean), who I introduced you to in my April blog, “Walking with DJ.” Mom and DJ (and their dogs) have logged many miles together around our neighborhood over the past ten years, talking and waving to everyone they encountered.

Mom and I last saw DJ on May 2, when we delivered a bouquet of flowers to her for her birthday. DJ  claimed she was celebrating her 84th b-day, but added that she was born May 2, 1931. Clearly not trying to appear younger, she simply had forgotten a couple of years along the way.  Who could blame her after 86 birthdays?

It was no surprise to me that DJ was not tracking completely. We’ve known DJ since we moved to the neighborhood a decade ago and she and Mom can happily repeat the same conversation over and over again as though it is the first time. Somehow though, she and her Schnauzer Maggie, have managed to live alone, with her seven kids checking up on her from time to time.

On our recent visit, she showed us her office where she pointed out all of the family photos covering the walls. I noticed with relief that her house was clean and tidy. I stealthily checked her refrigerator, grateful to find some fresh food in there and relieved that she was obviously still feeding herself. I refilled Maggie’s water bowl and noticed that Maggie looked cleaner than usual and well fed. DJ’s kids must have stopped by recently. As we left that afternoon, we turned back at the top of her driveway to see DJ waving and Maggie panting from the doorway, all of us unaware that it might be the last time we saw each other.

The next two times we stopped by, the house appeared unusually quiet and empty. No DJ. No Maggie.

In spite of her Alzheimer’s, Mom still remembers her friend DJ. Up until last year, she could even remember DJ’s phone number, but never her own. When we couldn’t reach DJ, Mom began asking repeatedly when we could call or visit her. I was also worried but hoped that her kids had found a place for DJ and Maggie to live with assistance or had taken them to live with family members. DJ had often complained that her kids wanted to “put me away.” I knew DJ and Maggie’s days of living alone were numbered and that she needed more help than she realized. I certainly didn’t blame her kids for wanting to help her. I just wished that we had gotten to say good-bye.

I figured DJ’s family must have told a few of the neighbors before leaving so I set out to discover who knew their whereabouts. Every day when we went out for a walk, Mom wanted to push her walker over to DJ’s house, “to see if my friend is home.”  We stopped by several of the neighbors’ homes and were surprised that no one knew where DJ had gone. Whenever we ran into anyone who lived on her street, Mom would ask with concern, “Have you seen DJ?”

Eventually, one of the neighbors said that they heard Dorothy had escaped from Village Green, a local retirement home, after only one night. I wasn’t surprised to hear about her breakout, especially considering how independent she had been and how resistant she was to leaving her own home. As sad as it was, I pictured DJ with Maggie in tow, making a run for it and actually had to smile at the image of the dynamic duo on the loose. I’m sure it was no laughing matter for her family though.

But where was Dorothy now? And who had Maggie? I made some calls to other facilities in the area but because of privacy laws could not get any information about DJ.

Last Saturday, one of DJ’s neighbors drove by while Mom and I were out for a “run” as I jokingly call our very slow walks. He told me that DJ’s son was at the house and I should go over and talk to him. Seconds later, I got a text from one of her other neighbors sharing the same news. The whole neighborhood was rooting for us to find Dorothy.

When we arrived, the sprinkler was on, the garage door was open and a truck was in the drive way. I rang the door bell and was greeted by DJ’s daughter in law. Apparently, she had been interrupted quite a few times by inquisitive neighbors that day so she was not exactly excited to see us. She told me that DJ was now in a secure memory care facility in Olympia, about an hour away, where she was not at all happy. I asked if Mom could call her or visit her to help ease the transition but she said they were not allowing any contact with anyone outside the family until DJ was more cooperative. When I asked about Maggie, she told me that she and her husband were caring for her. She grudgingly assured me she would let me know if DJ eventually settled down and was able to talk on the phone. I left not feeling very hopeful of that promise.

I  have a heavy heart for DJ and her family. I know first hand the difficult balance between trying to keep someone with dementia happy and insuring that they are well taken care of. I will have to place Mom in a care facility this fall when I am out of the country. The thought of her trying to escape or of being unhappy is too much to even contemplate right now. I daydream about Mom and DJ being roommates in a memory care facility, spending the day laughing and talking like old times. I can imagine them making the rounds to all of their new friends. Mom would brag once again that she and DJ “brought the neighborhood together.”

We still walk by Dorothy’s house every day. Mom has stopped calling her by name, referring to her instead as What’s-Her-Name or My Friend. I’ve started telling her that DJ and Maggie are on a long vacation. For my own entertainment, sometimes it is Hawaii and sometimes it is Tahiti. Occasionally, when we pass the house Mom stares at it without saying anything, as though she is trying to capture a distant memory but can’t quite articulate it. I’m afraid that by the time DJ’s family allows her to call that she will have slipped away from my Mom’s memory altogether. Unlike the Finding Dory movie,  the finale will probably not be a joyous reunion for these two friends. I hope that at least in their dream life they still walk together, waving to all of the neighbors and laughing at the same old stories. 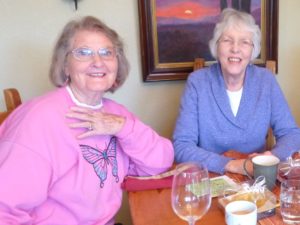