Is There a Badge for That? 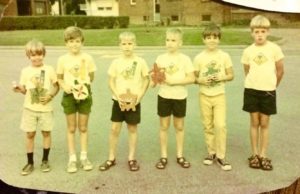 Three hours into our long drive home from the University of Montana this past week, I sensed Devin had had enough of our conversation. We had covered his best and worst classes during his first year at the university; best and worst teachers; favorite friends; favorite Food Zoo meals; best adventure of the year (Yellow Stone for wolf counting)  and what he was looking forward to this summer. He settled into binge watching Sense8, a favorite TV series on his laptop while I stared out the window daydreaming and Rocky drove.

I love stories. I love to hear them and I love to share them. I get a lot of eye rolling from my family when I bring up an old favorite like how the boys tried to eat rocks in the playground when they were toddlers but I keep telling the stories because they are the fabric of our family. I hope someday, I’ll hear the boys retelling their own kids about their early days.

While staring out the window I reminisced about my own grade school days and how creative and resourceful my mom was as a single mother in the early 70s. She and my Dad were missionaries in Japan during my first ten years. When their marriage ended, my Mom moved my younger siblings, Fred and Liz,  and me, plus our Japanese Spaniel Miss Puff, to Indiana to start over.

Before we arrived in Indiana, my Mom warned us that Americans wore shoes in the house! We thought that was the most hilarious thing we had ever heard and wondered if they also wore them to bed or in the bath?

Far away from everything we had ever known, my Mom managed to make a new life for us. She was the ultimate Do-it-yourselfer, probably more from necessity than choice. One of the first things she did was to sign me up for Camp Fire Girls and my sister for Brownies. When she couldn’t find a Cub Scout troop nearby for my brother, she volunteered to become a Cub Scout leader herself and invited the neighbor boys to join us.

Because Mom was the den leader, we hosted the cub scout meetings in our small house. By extension, my sister and I became honorary cub scouts. Mom got the neighbors to help put a fat, knotted rope in the tree behind our house and made climbing it part of our scout activities, earning the boys their official Physical Recreation Badge. She enlisted the help of some of the cub dads to help the boys cut racing turtles out of wood and paint them as part of their Fix-it Badge. The turtles raced along a string that ran through a hole in the turtle’s head. The string was anchored at one end and the cub scouts pulled up and down on the other end to make them move. ( See photo above taken after the race)

It didn’t take Mom long to figure out that she now had her own pint-sized work crew. When she needed the basement painted, the boys got the chance to earn their Artist Activity badge; and when she wanted the house cleaned she offered the Home Help Activity Badge as the prize. I don’t recall any of the boys taking her up on this one but my sister and I were unofficial  (and unenthusiastic) recipients.

As a single mother of three, Mom struggled to pay the bills and still provide meaningful activities for us, but we rarely felt we were doing without because she didn’t complain to us. It wasn’t until years later that she confessed how difficult those days had been trying to live on the meager wage she earned as a receptionist for a doctor’s office.

One of my favorite memories  of those Cub Scout Days was when Mom found out there was a free piano at a house down the street. The only caveat was that whoever wanted it had to move it themselves. She wanted us to learn how to play piano so she was very motivated. Creative as usual, Mom got the Cub Scout Badge catalogue out and mused, “I wonder if there is a badge for that?” ( This was obviously a precursor to “Is there an App for that?”)

As you can imagine, there was no piano moving badge, but she gratefully discovered the Road Safety Badge which solved her dilemma. The next time the cubs met at our house, we walked to the neighbors house which was about a half mile away. Somehow we managed to get the upright piano out of the house with Cub Scout power. Lucky for us, the piano had wheels so we pushed it up the street all the way home, taking care to stay safe in the road and note all of the safety signs so that the boys could earn their Road Safety Badge.

After arriving home with Devin last week, I called my brother, Fred, and asked him what he remembered of those long-ago Cub Scout Days and discovered it was very little. I also checked in with our long time family friend, Stephen Day, pictured above to the far left, who shared this photo and his memory of the turtle races with me. Since my Mom has lost most of her memories now, I feel compelled to keep them fresh by sharing them again. I wonder if there is a Badge for that?