Picking up the Pieces 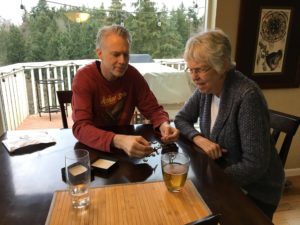 My brother stopped to visit us this past weekend on his way to Japan for a conference. He introduced himself, saying, “Hi Mom, I’m your son, Fred.” She smiled at his attention and his big hug. She has always loved the attention of a tall, good looking man.

He brought a puzzle to share with her that had forty itty bitty pieces. I smiled to think he would bring something so challenging for her but he dove right in with the story, carefully explaining to her that this puzzle depicted one of his favorite paintings, Foret Tropicale Avec Singes (1910) by Henri Rousseau and that he had a replica hanging in his office. She stared at him while he separated all of the pieces according to color. He showed her that some of the pieces were shaped like animals-a monkey and a snake. She continued to stare at him with curiosity as he put the forty pieces in their places creating a jungle picture with monkeys. Then she went to take a nap, her usual response to anything new.

When she got up from her nap, Fred asked her if she wanted to do a puzzle. She stared at him without an answer but with the hint of a smile. He got the forty pieces back out of the box and began to explain that this puzzle depicted one of his favorite paintings. He looked up at me impishly while he went through the exact same description- word for word- that he did the first time. He knows I live in an Alzheimer’s-related version of Ground Hog Day, the movie, with my mom’s daily repetitive questions. He found a way to simultaneously entertain Mom and torture his Big Sister as only a Little Brother could.

He repeated this Big Sister torture at least another six (or was it sixty?) times over the weekend, making me laugh and want to hit him at the same time. He left early on Monday morning, positioning the puzzle box on the kitchen counter with a tiny picture of Foret Tropicale Avec Singes on the front reminding me of our weekend. I open the box with its forty itty bitty pieces and say,                       “Mom, want to do a puzzle?”