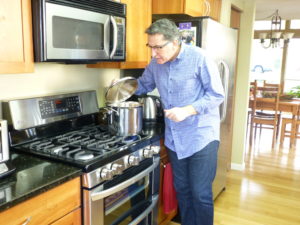 Last week a dear friend of mine lost her son. He was young, recently married, and full of life. His death was devastating for his friends, family and community. There is little that leaves you reeling more then the swift and unexpected death of a young person. In an effort to show up in some small way for my friend, I offered to bring some dinner for her family. Even in the midst of her grief, she reminded me to hug my kids and hubby and let them know they mattered.

I wanted to take some simple comfort food…a homemade vegetarian soup, a loaf of crusty bread, a salad and some brownies. Grief needs to be fed good food, I thought. My husband, Rocky, is the chef in our family. I make the quick vegetarian “mom meals” during the week and he makes the more gourmet dinners on the weekend, usually spending hours perfecting each dish. He convinced me that I needed to make a hearty soup with roasted chicken and roasted corn…a homemade chowder instead of a simple veggie soup. He found a recipe that he was convinced would be perfect.

I took the recipe to the store and loaded up my basket full of the ingredients, doubling everything because we needed to feed 15 people. I didn’t actually read the recipe though until the day before I was going to deliver the meal. Then I panicked. How was I going to make a hearty roasted chicken and corn chowder full of bacon? First of all, I don’t even know how to turn on the grill and secondly, I wouldn’t be able to “taste test” the soup because it was full of meat. What was I thinking?

As we were going to bed that night, I admitted my concern to Rocky and without thinking about it for a minute, he volunteered to work from home the next day so he could make the chowder for me. What a relief! And what a sweet gesture.

When I called him from work the next  day, he mumbled something about the chowder being a LOT more labor intensive then he had initially thought. Secretly I was glad I wasn’t the one that  chose the recipe since he was now struggling to create it. I knew he would  pull through. He always does.

When I got home three hours later the kitchen was in shambles. Every pan and cutting board we own was stacked on the counter and Rocky was unusually stressed. Generally cooking makes him happy but this recipe was not going well and he had been getting calls from work all day that he was trying to manage in between making the chowder.

I offered to be his “sous chef” now that I was home but he grumbled, “I’ve got it.” There were two huge pots of chowder coming to a boil on the stove and it was starting to smell like Thanksgiving in the house because of the chicken, sage, onion, celery and white wine in the soup. Even to this vegetarian, it smelled heavenly.

Ten minutes later I heard a string of expletives coming from the kitchen. Apparently, Rocky had added the cold milk and cream to the boiling soup which immediately caused the milk to curdle. (Unfortunately, the recipe failed to mention the milk should be heated first!) The chowder now looked like vomit. Surely it would still taste good though, right? No. Not at all. It was inedible. Rocky made a gagging sound and spit it out after he tasted it.

This was an epic failure. In the thirty years we have been together, he has only had two major kitchen fiascoes that I can remember. This was the third and I was  supposed to be delivering it to our dear friends in less than two hours. We both felt like crying but there was no time for that. We had to figure out another plan and quickly.

Thankfully, Gino’s Italian Restaurant is less than a mile from our house. I called them and ordered enough Chicken Parmesan and Cheese Tortellini for 16 people. It would be ready in an hour and a half. Rocky and I started laughing. The kitchen was a disaster. We threw out the soup and had a glass of wine. It’s definitely not worth crying over curdled milk.

When I delivered Gino’s entrees along with my salad, bread and brownies, I had a moment of disappointment that I wasn’t bringing our friends a fully homemade meal. I made no apologies though because their loss far outweighed any chowder disaster in our kitchen. At least they wouldn’t have to think about making dinner tonight; Gino’s had come through for all of us.

On the way back, I thought about what a good man I had waiting at home. He put a lot of of love in that chowder and while most of the ingredients were now in the compost bin, the house was still full of love. Sometimes love just looks like curdled milk.