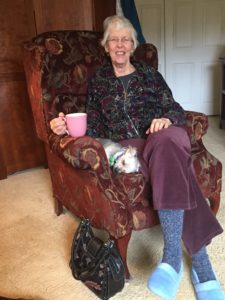 Most of us don’t get to our fifties without contemplating big questions like “Who am I?”  “What is my purpose?” and  “What is my relationship with the Divine?” For my mom, the questions she asks have changed considerably in the last ten years. What seems to occupy her thoughts now are “Where is the dog?” “Where is my lipstick?” and “Where is my purse?”

The first question makes sense to me because my Mom has always loved dogs. She and Tanner, our Yorkie Poo are inseparable. Now that Tanner is mostly blind, he sometimes wanders away from her side unintentionally and she wonders where he is. They are both relieved when they are finally reunited. Sadly, even though we had to say good-bye to our sweet chocolate lab, Rudy, this week she has not noticed or felt his absence like we have. She seems to think he is still in the house somewhere just out of her sight. We wish that were true…

The last two questions are perplexing though because I never knew my Mom to be overly concerned with her looks. She was a natural beauty who always enjoyed beating the “Guess My Age” contest at the state fair, making us, her kids, hide around the corner while the carnival guy was guessing. But she was never one for dress up, make-up and spa treatments.

When I was in high school, she became an amateur archeologist and helped dig up a mastodon that was found in a farmer’s bog in Southern Indiana. She smelled so bad when she arrived home from the digs that we would have to hose her off in the driveway before we could let her in the house. Later, in her 60s she became an avid camper and adventurer who kept a kayak behind the couch in her apartment so she could be ready to go on a moment’s notice. She was known for making the decadent brownies she always brought with her on camping trips, not for her lipstick color or designer purse.

That said, according to my Aunt Nancy, she and Mom were taught early on to wear panty hose and lipstick whenever they left the house. I guess as Mom’s memory recedes, what was important in her youth has become most important now. (So far she hasn’t asked for panty hose though!)

Wednesday, when the Hospice chaplain, Anna,  stopped by for a visit, she tried to steer the conversation with Mom to the more existential questions of life. I secretly wondered how the questions would land and if Mom would even be able to track what she was asking. After all, Mom has forgotten how to brush her teeth, how could she be expected to answer a deep question? Anna asked Mom if she believed in God and whether she felt a personal connection with God or if it was more impersonal. Surprisingly, Mom seemed to understand the question and said she felt close to God who she thought of as She not He.

On hearing Mom’s progressive answer, I silently berated myself for not trying to have more meaningful conversations with her, opting instead to stick to the tasks at hand: “Here’s your tea.” “Take your pills.” “Let’s get you dressed.”  “It’s sunny outside today. Let’s go for a walk.”  I wondered if I had given up too soon and could have been having real conversations all along.

Anna seemed encouraged by Mom’s response and asked her if she had any questions for her?  Mom considered for a moment and said, “Yes.  When am I leaving here?” Anna and I looked at each other, eyes wide. Did Mom really understand that she was dying? Was she asking how much longer she would be alive? Anna, treading lightly said, “What do you mean by leaving here, Mary?”  After several moments of us holding our breath in anticipation, Mom responded, “When am I going for a walk?”

And there it was. As much as I wished that “going for a walk” was symbolic and that she was contemplating big questions, what she really wanted to know was when we could go outside. I assured her that we would go soon at which point she asked, “Where is the dog?” “Where is my lipstick?” And finally…”Where is my purse?”