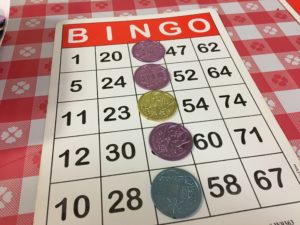 I’ve never been one to read the last page of a book first, in order to find out how it ends. But I’ll admit I am a planner. I usually have a list, a day-timer and lots of colored post-it notes to keep me organized and on top of things. So when I heard that Jyotishas, aka Vedic Astrologists, were known to reveal more details about your future than Western astrologists, I was intrigued. I had friends who had received a number of very specific readings from a particular Jyotisha in Seattle, so I made an appointment. What could it hurt?

Suzy, Karen and I have always told people, with a light-hearted giggle, that the success of our yoga studio hinges on the fact that I always say, “Yes”, Karen always says, “No” and Suzy says, “I need more information!” Over the past 12 years of being in business together though, our points of view have blurred. In fact, I have found myself saying “I need more information!” more frequently these days.

My questions revolved around my Mom’s health and I felt justified in asking them because we were planning a trip to Spain in the fall and I needed to make arrangements for her care during the time we were going to be out of the country. When Mom was first diagnosed with Alzheimer’s 13 years ago, her doctors, not astrologists, told me she would likely have 8-10 years to live. Clearly they did not have inside information on her longevity.

In April, I found myself sitting in the Seattle office of the renowned Jyotisha, to whom I had been referred, essentially asking for more information. Although I have read my Western Horoscope from time to time and even had a Jyotish Reading years ago, I have never relied on the alignment of the stars or planets to determine my next move. That day, though, I wanted answers.

Unlike their more ethically conservative Western counterparts, many Vedic Astrologists are not hesitant to share death dates because they come from a tradition that believes in reincarnation. Death dates simply mark the transition to a spiritual plane until the Spirit chooses to re-inhabit a body.

With some hesitation, I blurted out, “Can you tell me when my Mom will pass? Is it soon? Or does she have years to live?”  I honestly didn’t expect a definitive answer. So when the Jyotisha stated emphatically that Mom would pass on Saturday, August 26th at 4 pm, I was stunned. I had thought she might say, sometime in the next 6 months to a year, but an exact day, date and time was not what I was prepared to hear. I asked her if she was sure and she said “Yes”, but added, “Or it could mark the beginning of severe decline.”

The reading took an hour and a half and she shared a lot with me about my life: past, present and future. When I left the office though, I could only remember one thing: I had just a few months left with my Mom. How would I use this information now that I had it?  Who would I tell?  Was it even possible that it could happen the way the Jyotisha predicted?  For someone who had wanted more information, I felt like I came away with more questions than answers.

I shared the information with a few friends and family members who were open to the possibility that the reading was genuine. With everyone else, I felt like I had a dark secret that I had to keep close to my heart.

I was determined to make the most of the time I had left with my Mom. Having the information initially gave me more patience and compassion when I was around her. I took her for more walks and let her eat more ice cream. I felt less irritation with her challenges and more delight in her moments of lucidity and laughter. I tried desperately to hold onto whatever part of my Mom remained.

As the day approached though, I started to worry about how it was going to happen and whether she was actually going to die or become more incapacitated. For several days before the impending date, I couldn’t sleep, my face broke out and I found myself crying over even silly things. I was a mess.

I found out that the memory care facility where Mom was living was going to host a Bingo Fundraiser for Alzheimer’s at exactly the time she was supposed to die. When I told my Aunt Nancy, she tried to lighten my mood by telling me that it would probably kill my Mom to have to play Bingo!

Saturday, August 26th, I awoke to a beautiful day. The sky was so blue and the sun was shining. My first thought was, “It’s too beautiful of a day to die.” At 3 pm, Rocky and I headed over to Mom’s place. My stomach was in knots but my rational brain was also trying to distract me with all of the reasons that this was NOT Mom’s last day.

When we arrived at Bingo about 25 other residents and family members were already playing. We settled into our own table off to the side. I was still not sure what to expect and didn’t want to be in the way if something actually happened. What is the protocol for dying during Bingo, anyway?

We were given large easy-to-read Bingo Cards ( no glasses necessary!) and bowls of poker chips to mark the numbers. Right away, I won the first game we played and received a giant donut maker as a prize. I had the crazy thought that a donut maker was no gift if Mom was going to die any minute. Rocky and I kept alternately looking at our cards, helping Mom with her card and looking at each other in anticipation of whatever was about to happen. I’ve never been so on edge playing Bingo.

At 3:40 pm, I noticed Mom had five in a row and urged her to call, “Bingo”. She won a car wash kit. We laughed out loud that she would win something so completely useless to her. She had no idea what it was. At close to 4 pm, Rocky yelled,  “Bingo” and someone at the other table groaned, “You have got to be kidding me…” since all three of us had now won a game, one right after the other. Feeling embarrassed, Rocky passed on getting a prize.

We played till 4:30 pm. Nothing awful happened. Had the alignment of the planets actually predicted that Mom would die of embarrassment from having to play Bingo?

Before we left, Rocky and I helped Mom get to the dining hall for dinner, being ultra careful not to let her fall. We were still not sure if some trauma was in store for us that night but we were starting to breathe more freely. I practically skipped out of there. It was almost five on August 26 and Mom was fine. I felt like I had won more than Bingo!

The next day, one of Mom’s caregivers left me a message while I was teaching a class.  I will admit, my heart skipped a beat when I saw the phone number. It was one of my favorite caregivers, Lou. Her voicemail was excruciatingly slow… “Jeni, this is Lou. ” (big, long, pause) “From the memory care facility.” (I know who you are, Lou!) “I’m calling about your Mom. ” ( I only have one family member living there, Lou!) “Mom took a fall.”  ( Is she OK? Did she hit her head? What happened???? Is she alive? ) “Mom’s OK.” (Oh Thank God) ” Just wanted you to know.”   ( Take a breath. All is well. Thanks for the call, Lou. )

Since then, I’ve felt more relaxed about Mom. I know she won’t live forever but she is OK today. There are no dreadful dates looming and I can appreciate the sweet moments we still have together. Today during my visit, I read to her from Maya Angelou’s book of poetry, And Still I Rise, always one of Mom’s favorites. The poem was called “On Aging”  She laughed out loud at the last stanza, “When you see me walking, stumbling, Don’t study and get it wrong. Cause tired don’t mean lazy And every goodbye ain’t gone. I’m the same person I was back then, A little less hair, A little less chin, A lot less lungs and much less wind. But ain’t I lucky I can still breathe in.” Yes, ain’t I lucky she can still breathe in, I thought.

I’ve learned something valuable through all of this: Don’t ask. It’s better not to know, at least when it comes to the end game.