The Story of Tan 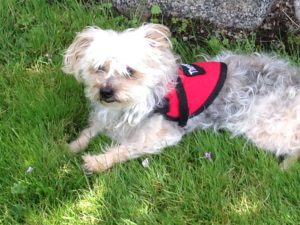 The first time I met Tanner, it was November 5, 2010. I was hosting a yoga retreat at Skamania Lodge near the border of Washington and Oregon.  I was wearing my yoga-retreat-coordinator hat and attitude that day, not my crazy-about-dogs hat.

I walked into the first class of the retreat and noticed a little dog sitting on a yoga mat.  My first reaction was curiosity but that was quickly overtaken by irritation that someone would bring a dog to the retreat without notifying me in advance. Granted this was a small dog but I knew the type… he looked like some kind of a terrier. I had a Jack Russel Terrorist at home named Suki. As much as I loved her she could be yappy and obnoxious. Definitely not suited for a yoga class. I was not teaching that first retreat class so I put my mat right next to the dog’s mat, determined to remove the little trouble maker from the room as soon as he started showing his true colors. I introduced myself to his owner, Dorice, trying not to show my annoyance at her presumption that a dog would be welcome at this retreat. She told me her dog’s name was Tanner.

When the class started, Tanner curled up and went to sleep on top of Dorice’s sweatshirt while Dorice did her practice. Later when Dorice was in a seated posture, he climbed up on her lap. He didn’t make a noise. He just sat there looking adorable. I could not stop watching him. Sometimes he opened just one eye and looked at me. I fell in love. 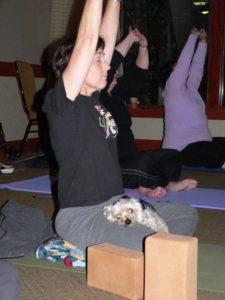 After class was over, she took out a tiny plastic soccer ball and threw it for him. He retrieved it over and over with so much enthusiasm that everyone cheered.    I begged Dorice to let me be his dog sitter any time she needed one. Tanner soon became a fixture at both our home and at every yoga retreat that followed. (I had hoped that his angelic personality would rub off on our dear Suki but that never happened.) Dorice traveled frequently to California to see her boyfriend Daniel and her family, so Tanner spent many weeks at Camp Martinez, quickly becoming part of the family.

It wasn’t until months after the Skamania retreat that Dorice admitted that Tanner was her therapy dog. She had been in cancer treatment for eight years by then and had adopted Tanner at the beginning to help her get through chemo and radiation and the bad days that followed the treatment regimen. Dorice rarely let on that she was ill. In fact she went to law school, became a lawyer and then returned to school to become a speech therapist when she decided she didn’t like being a lawyer, all while in treatment. The only time she mentioned her illness was when she jokingly told me that if she died before Tanner did, that I would inherit Tan Tan. I told her that was never going to happen. 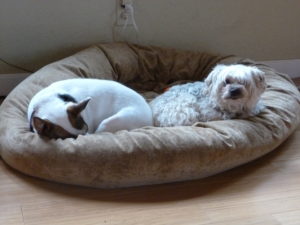 Dorice and Tanner lived with us the summer before she moved to Southern California for her first job as a speech therapist. She taught me to quilt and made two quilts for us in the time it took me to complete one. After they left, we stayed in touch through texts and calls. When Suki died she flew up to stay with me for a few days and help me get through the week. We made plans for her to return with Tanner for the next yoga retreat.

In December 2014, Dorice lost her battle with cancer when she unexpectedly had a bad reaction to a new chemo drug. Daniel called to let me know that she had left me Tanner. That same night Dorice appeared to me in a dream that was so real I can still recall every minute of it clearly. She sat on my bed and apologized to me for not saying good-bye. She made me promise to take care of Tanner. And then she was gone forever.

On New Year’s Day,  2015, Tanner officially joined our family. When he arrived, he looked all over the house for Dorice and Suki and when he couldn’t find them turned his attention to the rest of us. By then we had adopted Rudy, a chocolate lab. Rudy seemed to have the same reaction to Tanner that I did initially: very wary and suspicious. But just like he had with me, Tanner won Rudy’s heart, often sharing a dog bed together next to my desk while I worked. 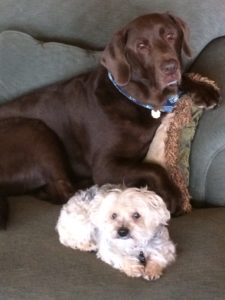 My boys, Rudy and Tanner

Tanner also quickly realized his therapy dog services were needed with my Mom. He became her constant companion, helping to keep her calm and going on many walks with her around the neighborhood. When he lost his eye sight earlier this year, he still maneuvered around the house and through the dog doors as though he could see. I tried my best to be his seeing-eye-person on our walks but I was lousy at it, at times accidentally dragging him into bushes or off of a curb.

A few weeks ago, Tan Tan wandered off of our top deck and landed ten feet below on our bottom deck when we weren’t looking. Fearing the worst when I heard him yelp, I ran downstairs to find him. He stood up, shook it off and walked towards me …nothing broken, no worse for the fall. Devin’s theory is that because Tanner couldn’t see, he didn’t tense up before the fall and therefore did not get injured. My theory is that Dorice actually caught him and lowered him to the ground.

Since August 1, Tanner has accompanied me to the memory care facility where Mom is now living. He has been the most popular visitor in the facility every time we’ve visited. All of the residents who were able to, took turns holding him and reminiscing about their own dogs. Always patient and kind, Tanner never seemed to tire of hearing the same stories over and over again. 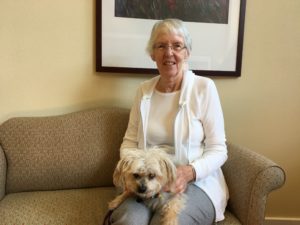 Thursday night, Tanner’s organs began to shut down and our vet encouraged me to put him down. My only consolation was knowing Dorice would be there to meet him on the Rainbow Bridge, most likely with a tiny soccer ball. Losing him feels like losing Dorice all over again but at least now I know they will have each other forever. Good-bye for now, my Friends… 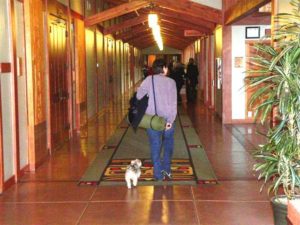